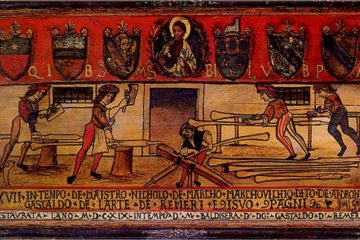 Building a traditional Venetian boat in the Basque Country /3

Everything is going according to plan: after the forcole of last week, this week we made remi, the oars.

We couldn’t use Basque oars, of which we have aplenty obviously, because they are not the right shape and dimensions. After all, the Venetian rowing style is so inherently different: standing and facing forward, the rower needs a much lighter and slender oar.

In Venice, the artisan making oars is the same one making the oarlocks. Actually, it is called remer, i.e. oar-maker.

Since 1500, Venice made the oars for its galleys out of beech, sourced in the Cansiglio forests, on the Alps (https://en.wikipedia.org/wiki/Cansiglio).

Even though modern oars in Venice are made with a variety of different kinds of wood (with a preference for the exotic ramin for its straight and clear bole: https://en.wikipedia.org/wiki/Gonystylus), we decided to go for the traditional material, and started out with a single plank of kiln-dried beech (320x19x5cm).

Following step-by-step the process detailed in Gilberto’s book (which, by the way, is written in both Italian and English, and available here: http://www.veniceboats.com/it-pubblicazioni-catalogo-libri-forcole.htm) we marked out and cut the two oars.

After planing the sides to the wanted dimensions, we cut the notches on the sides of the blade at 45°, and glued on the off-cuts we saved from the initial cutting at the band saw.

These side-strips have different purposes: their different lenghts indicate if the oar is for port or starboard (the long strip always faces forward), and in the case of fir oars, they are still made of beech, helping protect the thin blade from accidental hits. This is a common occurrence, in a city with narrow canals surrounded by brick-and-stone walls.

After the epoxy had cured, the shaping begun. The blade is asymmetrical in many ways: first of all, the tip raises from the horizontal line of the loom, in order to move more water. This is much more evident on modern scoop-oars, but that’s basically the same principle.

Secondly, the blade is rounded on the bottom, and has a spine on the top. This reinforces the blade, as much as folding a sheet of paper in half and then holding it as an inverted V makes it possible to keep it horizontal, without collapsing under its own weight.

Lastly, this spine is itself not centered on the blade, but more towards aft. This makes the center of gravity of the oar move aft as well, helping the rower with the peculiar movement Venetian voga requires.

With the help of a spar gauge I had built my first year here in Albaola, we marked the looms and went from square, to octagonal, to 16-sided, to circular. Of course this involves a lot of planing, look at Ioanna loading a full wheelbarrow with a day’s worth of shavings!

In case you where wondering where I got them from, here are the plans for the spar gauge:

After some scraping and some more sanding with progressively higher grits (we went from 60 to 120, through 80 and 100), we marked the oars on the handle in the traditional way, in order to quickly distinguish which one goes forward and which aft.

The whole process took us only a few days. As per the forcole, it took us less time than expected. Here you can see me enjoying my first alzaremi with the new oars.

Alzaremi (literally “oar-lifting”) is the traditional salute at rowing events and regattas in Venice. I can’t wait to be able to properly do it on the boat!

But we all know that an oar is not ready until it’s got oh so many coats of varnish. At the moment of writing, we only have three coats on, so this will go on for a while also next week…

Next month there will be a press conference to present the s’ciopon, so Ioanna an I are working hard to get started as soon as possible. We have begun assembling the cantier, i.e. the strongback onto which the boat is built. More on that next week. 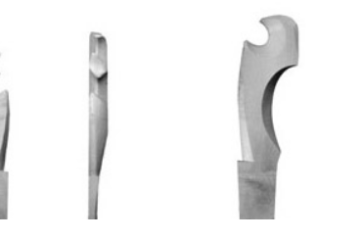 Building a traditional Venetian boat in the Basque Country /2

Well, not the boat herself actually. In fact, the workshop is so crammed with boats at the moment, that we cannot yet start installing the strongback for our sandolo.

But we started nonetheless, deciding to make a couple of forcolas, the typical Venetian oarlocks.

The idea is to have them ready before the boat is, together with a pair of slender oars. This way, I will have the time to teach whoever of my colleagues might be interested in learning how to row the Venetian way. It’s not as easy as it might seem, more on that in a future post!

Usually, a forcola is made of walnut, or a similarly dense and hard wood, such as pear or cherry. But we are on a budget and we found a piece of chestnut lying around the workshop. We decided to “acquire” it and give it a go. We’ll see how it goes.

Here are the first steps of the process, but hey: wait a moment, that’s not chestnut…

In fact, Ioanna and I were a little afraid of trying out our sculpting skills on the one and only chestnut plank we have. Also, who has had some experience with forcolas knows how easily their tips break when rowed badly. Not a good idea to have rowing classes with the fancy ones!

At the end, we decided to make a “trial version” out of beech, to use as training forcolas. I love the color of beech, and the carving is so crisp!

After having chosen a picture of a pair of forcole made by Saverio Pastor, we scanned and enlarged the image until it was to scale with the measurements we got from some Venetian friends (thanks Alice and Nicolò).

We then printed this out and used it to cut a couple of plywood patterns, much more durable than paper in the harsh workshop conditions. We are gonna use these again with the chestnut in due time.

After tracing the outline on our pieces of wood, we cut the outer profile with the bandsaw and then went on shaping the forcolas by hand.

As you could see in the video of Piero Dri above, this phase traditionally only involves the use of a drawknife. Not having one with the right dimensions though, we resorted to a mix of drawknife, spokeshave, chisel/gauge and mallet, blockplane, and even a rasp for a couple of hard-to-reach spots.

After some live help from Piero and others coming from Instagram and Telegram, we finally made it. They are certainly not perfect but I must say they don’t look too bad. And you should consider that Ioanna had never even seen one before making hers.

Next week we will be looking at the oars. I have the feeling that it’s not gonna be easy either.

You can find some leaks from the work in progress on our Instagram profiles along the week, follow us in case you can’t wait! 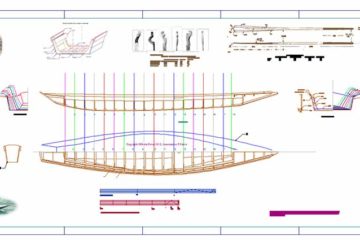 Building a traditional Venetian boat in the Basque Country /1

Having begun my third and last year of apprenticeship here at Albaola (http://www.albaola.com/en/site/boatbuilding-school), I was feeling confident enough to present a project for the construction of a Venetian boat.

Venetian boats are the reason why I started this formation in the first place, therefore it seemed like the right thing to do to build one while here. Also, it would be nice to share a piece of Italian maritime culture with the other apprentices and shipwrights working with me, and teach some Basques how to row the Venetian way (standing and facing forward).

What is a sandolo s’ciopon?

The tiniest member of the sandolo family, the s’ciopon is usually between 5 and 6 meters long, with a beam of a little over 1 meter, and only some thirty centimeter above the waterline. Having a flat bottom, just like any other boat of Venice, it draws a few centimeters of water. It is therefore perfectly adapted to its enviroment and purpose: duck hunting in the open lagoon, with its shallow waters.

Small and light, it is usually rowed as shown in the picture above, with crossed oars, i.e. alla vallesana. It might anyway as well carry two rowers, in which case one would row at the bow on port side, while the other aft, on starboard. A single-oared “gondolier” aft also would do.

When approaching the hunting ground, the rower would crouch on the floor and keep the boat moving thanks to the palina, a paddle with leaded end. The washboard would often be reduced right near the aft rowing area, specifically for this reason.

As can be easily noticed, the main feature of this boat, however, is the huge gun (s’ciopo), from which the boat itself takes the name. Up to three meters long, it would normally be a cal. 75 loaded with lead projectiles and aimed point-blank to duck flocks.

Duck hunting in the lagoon of Venice was banned in the ’70s, so that not many s’cioponi are built nowadays. Some, however, still are and others have been restored and converted to leisure skiffs, sometimes even mounting a small rudder and sail.

Since I have never built a Venetian boat before, I decided to start humble and begin with the very simplest design available.

The construction method is the same for all small boats in Venice, such as for example the gondola or the topo, but this boat is stripped down of everything unnecessary and reduced to the bare minimum: it’s a simple boat that simply does its job. I will cover in depth the construction during the following weeks as we go along with the built (spoiler alert: we’ll start by making oarlocks and oars).

Building a small boat also means being able to do it faster and with fewer people involved: we plan to finish in a couple months, and by “we” I mean me and Ioanna, a fellow apprentice. You might follow her on Instagram here: https://www.instagram.com/io_moutou/ (she’ll probably post some pictures of the work as well).

Last but not least, using less wood means the project will be cheap, and who doesn’t like cheap?

Building a traditional Venetian boat in the Basque Country

This website uses cookies to improve your experience while you navigate through the website. Out of these, the cookies that are categorized as necessary are stored on your browser as they are essential for the working of basic functionalities of the website. We also use third-party cookies that help us analyze and understand how you use this website. These cookies will be stored in your browser only with your consent. You also have the option to opt-out of these cookies. But opting out of some of these cookies may affect your browsing experience.
Necessary Sempre abilitato
Necessary cookies are absolutely essential for the website to function properly. This category only includes cookies that ensures basic functionalities and security features of the website. These cookies do not store any personal information.
Non-necessary
Any cookies that may not be particularly necessary for the website to function and is used specifically to collect user personal data via analytics, ads, other embedded contents are termed as non-necessary cookies. It is mandatory to procure user consent prior to running these cookies on your website.
ACCETTA E SALVA