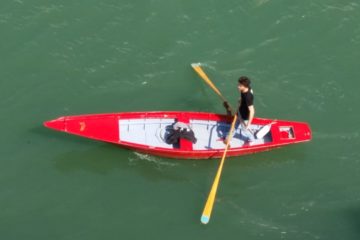 Building a traditional Venetian boat in the Basque Country /12

A bit unexpectedly this week I have been to Venice. I took advantage of this opportunity to photograph lots of boats, both under construction and moored along the city’s canals.

Needless to say, it was wonderful. Especially now that there are almost no tourists because of the pandemic.

Meanwhile, in the Basque Country, the work on “Laguna” didnt’ stop. Ioanna and Alejandro kept on going and finished the aft deck and all the stanchions.

There are different ways to build the decks, here is how we decided to do it:

All this seems quite easy and straightforward, but has all been coordinated via messages on Whatsapp and phone calls. Luckily in Venice I had access to many boats and books that I could take pictures of and send to my team.

Our invaluable volunteer helper Alejandro worked on the stanchions (mancoli), which we decided to make slightly taller than the original boat, in order to have a higher washboard (falca), and account for the mistakenly low sides…

Ioanna has also been working on the breasthook (sochéto), but I’ll post more pictures of that next week, together with the other deck. 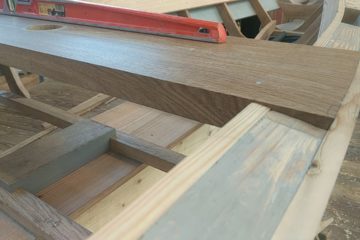 Building a traditional Venetian boat in the Basque Country /11

Time to fasten the seat-risers! Or is it?

Normally, the spaces between two frames and seat-riser and outside plank are filled with larch blocks. There is no gunwale on the sandolo s’ciopon and the blocks help strengthen the whole boat.

Usually, every other space is left empty in order to be able to tie a rope around the seat-riser when mooring. This is especially useful if you think that there is no stringer either on this kind of boat.

These blocks are traditionally fitted after the seat-riser has been fastened, but we decided it would be easier to fit them before.

We also finally installed the last frames, which sit directly onto the stem and don’t have a proper floor timber.

Since they are hidden under the deck, many times they are not even cut like the rest of the frames, and square pieces are used instead. But we had a couple wrong frames left from the previous weeks and decided to recycle them.

Alejandro, a volunteer interested in applying for the Aprendiztegi, has been helping us this week, therefore we managed to get a lot of work done.

Here he’s drilling the hole for the mast in the center of the thwart he has been preparing.

Next week we’ll focus on closing the decks, plus some other little things… Stay tuned! 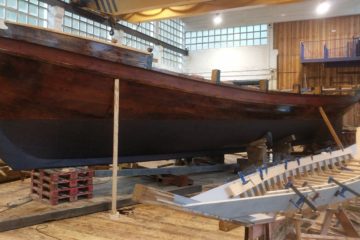 Building a traditional Venetian boat in the Basque Country /10

This week was all devoted to the preparation for the launching of the patatxe.

A patatxe (we use the Basque spelling here: https://en.wikipedia.org/wiki/Patache), was a light sailing vessel with two masts originally used for patrolling the coastline, especially in this area close to the border near .

Patatxes later took part in trans-Pacific expeditions and because of their speed and versatility they were soon favored by pirates as well.

The launching went well, and we now have plenty of space in the workshop! Now back to the sandolo.

As you can see from the picture, we found some time to position the stringers and fair the frames in order to fasten them.

We also cut all the frame heads, which is always a difficult and at the same time relieving step in the construction process.

Notwithstanding all the measuring (“measure twice, cut once”, they say), some of them look a bit off and will need to be trimmed again later, until they are all nice and consistent. There is no gunwale on this kind of boats, therefore the frames will be visible and we want them to look good.

This week Ioanna and I will be back to work on Laguna at 100% and we hope to get some real progress done.

In fact, there are great news from Venice: apparently, the Vogalonga committee is trying to organize this year’s edition for May 23rd!

We may have a deadline for finishing our project.

I’ll make a post devoted to the Vogalonga further on, when we have more news about this year’s edition… and our possible attendance. 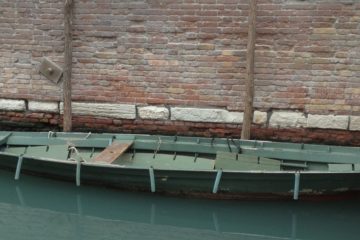 Building a traditional Venetian boat in the Basque Country /9

I am writing today, because we have been working until Easter. The museum of Albaola was open and a few of us students had to keep the workshop “active” while the guided tours passed by. Good for us, because we actually lost a lot of time trying to wrap our head around many small details that are still not so clear in our minds…

All in all, it has been a week devoted to frames. We finally finished and installed all of them!

Unfortunately, trying the stringers on, we realized that they will need a bit of fairing on the inside of the boat. One of the frames is actually quite different in dimensions, because it was made by a volunteer, interested in joining the school next year.

It’s always difficult to make sure that volunteers have a full picture of what they need to do, probably we should have double- and triple-checked the frame before installing it. Now it’s too late, I hope we can fix it next week without having to disassemble it…

Another volunteer (he’s also interested in the school, let’s hope next year there will be more new people than there were this one), made the mast-step. It touches the bottom of the boat, even though sometimes it is suspended on the frames to allow water to pass below it in the bilge. It raises two cm above the frames, so that it will be flush with the floor boards.

I have started thinking of the forward deck, and cut the first beam out of a curved-grain larch offcut. There will be three beams in total, but I never got to installing it because we still need to trim the edges of the planks.

This is where we lost a lot of time. The edge of the planks, which is now square, has a rolling bevel with the angle changing as you move towards the ends of the planks, where it flares out. This bevel is usually planed “by eye”, and we don’t have that skill yet.

The top of the planks also affects the angle at which the frame-heads will be cut (the edge is not level, since Venetian gunwhales are usually tilt outwards). Nobody wants to cut them and then find out they are too short!

My boatbuilder friend Nicolò Zen has been helping me a lot during the last weeks, and he has sent me a couple interesting things lately. The first one is a picture of the boat from which the plans we are using were taken:

The second one is a video. And what a video. It’s an episode of “Pianeta mare” hosted by Tessa Gelisio, from Italian tv channel Rete4. From the info I could gather (here: http://www1.adnkronos.com/Archivio/AdnAgenzia/2007/03/09/Spettacolo/Televisione/TV-IMBARCAZIONI-FAI-DA-TE-DOMENICA-A-PIANETA-MARE_130413.php) it was aired on March 2007.

It’s a two-day build of a s’ciopon by Agostino Amadi (this one: https://www.agostinoamadisrl.it/dati/schede/schioppon_en.htm#), one of the most renowned names among Venetian boatbuilders.

This website uses cookies to improve your experience while you navigate through the website. Out of these, the cookies that are categorized as necessary are stored on your browser as they are essential for the working of basic functionalities of the website. We also use third-party cookies that help us analyze and understand how you use this website. These cookies will be stored in your browser only with your consent. You also have the option to opt-out of these cookies. But opting out of some of these cookies may affect your browsing experience.
Necessary Sempre abilitato
Necessary cookies are absolutely essential for the website to function properly. This category only includes cookies that ensures basic functionalities and security features of the website. These cookies do not store any personal information.
Non-necessary
Any cookies that may not be particularly necessary for the website to function and is used specifically to collect user personal data via analytics, ads, other embedded contents are termed as non-necessary cookies. It is mandatory to procure user consent prior to running these cookies on your website.
ACCETTA E SALVA