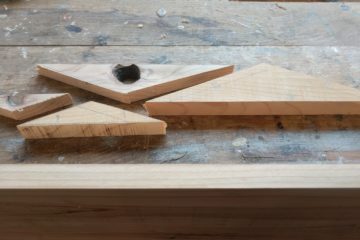 Building a traditional Venetian boat in the Basque Country /7

This week was a short one: Friday was San José (Saint Joseph), Father’s Day and national holiday in Spain.

It sort of makes sense that we wouldn’t work. After all, he’s the patron saint of all carpenters (including boatbuilders). For sure Noah would have been a much better choice, since he was an actual shipwright (Medieval depictions of him building the ark offer a wonderful representation of the tools of the trade, which haven’t changed much since then).

But Noah was not so lucky, having made the mistake of being born before the coming of Christ. He was friend with God and saved all humanity (plus the animals, obv), but he was not a Christian and therefore is spending the rest of times in Hell. Probably forever fairing a hull that will never be fair, or sanding something for eternity… I could not thing of a more terrible torture.

Anyways, let’s not dwell on theology, we have a boat to build!

This week Ioanna has finished planing the after filler block, so that the side planks arrive nice and snug, hopefully without letting water in.

We have also cut both sheer planks at the desired width (around 20/25cm), drilled out some nasty knots and plugged them, and painted the inside with a first coat of primer. It is much easier to do it now then after they will be hanged, with all those frames installed.

I have spent quite a lot of time trying to figure out the shape of the plank at the bow, and how they meet with the stem.

After some trial and error, and a few phone calls and pictures sent to a boatbuilder in Venice friend of mine, I have come to the conclusion that:

Also, as a bonus, I had forgotten that the edge of the plank should be cut at an angle inferior to 90°, so that it gets trapped into the stem.

Long story short: on Thursday I took off stem and forward filler block, and milled up a new one. I will be installing it next week.

This is what happens when you have never built a boat of this kind before and you don’t have a boat to copy near to you to use as reference. But it’s probably what makes it more fun. Maybe.

On a more light note, if you follow my stories on Instagram (@acqua_stanca) you already saw our new mascot, that Ioanna (@io_moutu) bought: a miniature decoy duck. The full-sized ones are called stampi in Venetian and were used when hunting in the lagoon of Venice. The boat is a s’ciopon, after all.

Next week we’ll have a press conference to present the project to the local newspapers, let’s hope we have something nice to show them! 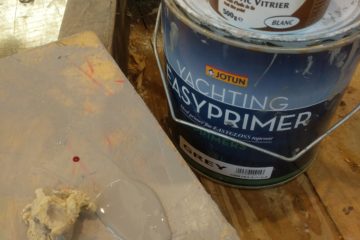 Building a traditional Venetian boat in the Basque Country /6

At last, the patatxe has been moved, and Ioanna and I were finally able to fasten our cantier (the strongback) and start building the sandolo for real. The countdown has officially started: let’s see how long will it take us to finish it.

After marking the colomba (keel-plank) with a centerline and all the frame stations, and making sure it sits level across on the whole length of the cantier, I embarked in the task of fitting the stem, while Ioanna did the same with the transom.

We chose oak for the stem because we have plenty available (a luxury we will miss after we leave the Aprendiztegi, I am sure). We didn’t have any wide oak offcuts to use as transom, so we went with larch, which would be the traditional wood choice in Venice, anyways.

With the help of a couple battens, I traced the lines of the rabbet on the stem, and carved it with a chisel. I wasn’t really sure of the shape it would have, but it turns out it is basically a straight line. Now, that’s convenient. I left some extra material in there, you never know: we’ll probably have to adjust the bevel slightly eventually.

Since we are actually copying an existing s’ciopon, of which we have the exact measurements, we decided to add and extra step to the traditional construction method and place the first and last frames as well, in order to get a more precise idea of the shape of the boat and, most importantly, height of the sheer.

Once the frames were in place, the following step has been fitting two filler blocks. These have a triple function:

Once we had everything fitted, we bedded the parts with a mix of linseed-oil based putty and primer (and some blood, because accidents happen). We then nailed everything into place and we were ready for the next step: hanging the sheer planks.

Well, first of all we actually had to go and find suitable planks. Our larch stock is only six meter long, so we considered scarfing two planks together in order to reach the 6,30m (more or less) we needed. But luckily, someone remembered of a pile of cypress planks, which were the left over from a boat we had build in the school two years ago.

Obviously the planks that were left were full of dead knots and spikes, but since they are very wide and we only need planks of around 25cm width, we probably found something good enough for us.

The smell of cypress when you cut it is amazing! 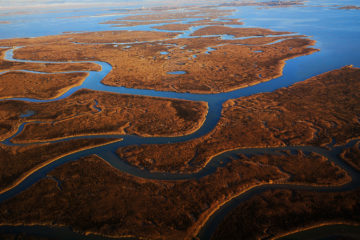 Building a traditional Venetian boat in the Basque Country /5

We have a name! I mean, Ioanna and I obviously already did, but now the sandolo has officially a name, too.

Last year, I was reading a book on boatbuilding (not that I read much else lately). I’m not quite sure if it was “From Tree to Sea” by Ted Frost https://openlibrary.org/books/OL22307584M/From_Tree_to_Sea or “How to Build a Wooden Boat”, by Bud McIntosh https://www.woodenboatstore.com/products/how-to-build-a-wooden-boat). Both are very much recommended, by the way.

Therefore I’m happy to announce that our little sandolo will be called “Laguna”.

“Laguna” means “lagoon” in Italian. The lagoon of Venice is justly famous for its beauty and is actually part of the UNESCO site comprehending the city of Venice: http://whc.unesco.org/en/list/394

Specifically, if you remember from my previous posts, the sandolo s’ciopon was used in the past especially for hunting out of the city, in the lagoon.

But I also wanted the name to reflect the fact that the boat is going to be built in the Basque Country. For a fortuitous event, “laguna” also means “friend” in Euskara (https://en.wikipedia.org/wiki/Basque_language).

What better name to seal the friendship between Venice and Pasaia (home to Albaola) that this projects wants to symbolize?

Naming a boat is probably the most difficult thing to do, after naming your child, but I think we did good here. See you soon, Laguna! 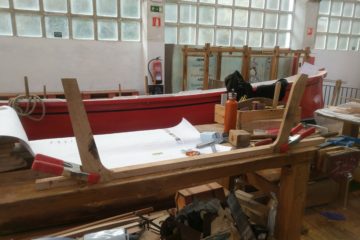 Building a traditional Venetian boat in the Basque Country /4

There were, however, a lot of things that we could do this week. Most important of all, milling up the wood to the dimensions of the parts we will need.

First things first: a boat would not float without a bottom. The flat bottom of our sandolo will be made out of three very wide larch planks (about 32 cm each), planed down to 1.8 cm thick.

Moving up, we needed frames. Lots of ‘em. I believe 38 in total.

Keeping in mind to leave enough material for the changing bevel of the frames, we used a pattern of the central frame (maestra) to mark the wood to cut.

Since we don’t usually work with such small boats, we tried to take advantage of leftover oak planks, planed down to just 1.8 cm.

Floor timbers where the easiest part to source. There are 18 of them, but the shortest is only about 30 cm long and the longest slightly more than a meter. They all are 4.2 cm wide and 3 cm thick. In Venice they would be in many cases made of larch, especially for such a small (and cheap) boats. We have an abundance of oak, so we’ll give her some extra strength.

We then assembled the main frame (that we’ll need next week to hang the sheer planks). The floor timber has two notches to accommodate about two thirds of each frame, in order to prevent it from moving.

Nowadays boats in Venice are mainly fastened with stainless steel screws, but we are building this s’ciopon the old way, therefore we fastened the three parts together with galvanised nails.

Ioanna also started the transom, and I tried to figure out how the stem is going to be shaped. More on that next week, when we would like to install them on the strongback.

This website uses cookies to improve your experience while you navigate through the website. Out of these, the cookies that are categorized as necessary are stored on your browser as they are essential for the working of basic functionalities of the website. We also use third-party cookies that help us analyze and understand how you use this website. These cookies will be stored in your browser only with your consent. You also have the option to opt-out of these cookies. But opting out of some of these cookies may affect your browsing experience.
Necessary Sempre abilitato

Any cookies that may not be particularly necessary for the website to function and is used specifically to collect user personal data via analytics, ads, other embedded contents are termed as non-necessary cookies. It is mandatory to procure user consent prior to running these cookies on your website.